To Reduce the Prices, Benha University Launches an Initiative to Distribute Four Tons of Sugar on the University Employees 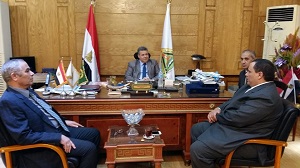