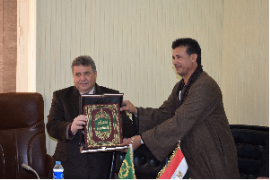 Prof.Dr. El-Sayed El-Kady, the university president urges the peasants union to determine what the labor market needs in order to be put in the Curriculums of the stduents. The university president is hosted by Mr. Muhammad Farag, the head of the peasants union, Mrs. Hanan Mosaad, the assistant of the head of the peasants union, prof.Dr. Monir El-Ganzowry, the economic chancellor and the spokesman of the union, Mr. Wageh Abd El-Alaim, the peasants member and Mr. Mekawy El-Gamal, the general secretary of the EL-Monifya Governorate. The university president invites the delegation to participate in the faculties of agriculture tour around Egypt from 4-2-2017 to 8-2-2017 in addition to inviting the delegation to the talk forums which is organized by Benha University to develop education and scientific research in 25-2-2017.
“Holding the First Arab Forum about Higher Education in Cooperation with Jordan” says the University President

Keywords: The University PresidentFaculty of AgricultureFaculty of veterinaryThe head of the peasants unionThe economic chancellor and the spokesman of the union