A big ceremony of October war in Benha University 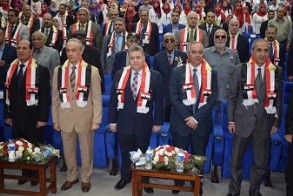 Benha University holds a big ceremony of October war which includes the second educational forum of the university. The ceremony witnesses honoring the martyrs and the injured of Qulubia inhabitants and the armed forces sons in addition to a concert that has been held in the university by the musical band of Benha university. This ceremony is attended by the general/ Muhammad Tawfik, the directorate of security in Qulubia, the general/ Mahmoud Khalifa, the former governor of new valley governorate and the military chancellor of the Arab League, the vice presidents of the university president, the faculties' deans, the faculties' members and the Benha university's students.