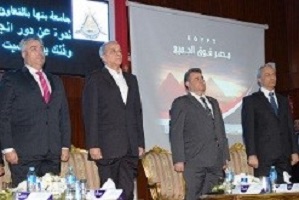 The head of the authority of administrative control says that the corruption is the biggest hurdle of the countries' development and fighting corruption is the responsibility of the peoples stressing the corruption is an equation between a corrupt and anti-corrupt. This statement concurs with the proceedings of the anti-corruption forum that is organized by Benha University in cooperation with the authority of administrative control under the presidency of prof.Dr. EL-Sayed EL-Kady, the university president and it is attended by prof.Dr. Amer Ezat Salama, the general secretary of the Arab Universities union, general, Mahmoud Ashmawy, EL-Qulubia governor, general, Muhammad Tawfik EL-Hamzaway, EL-Qulubia security director, the faculties' deans and the university's students.